The 2022 Ford Bronco is easily one of the most highly sought-after vehicles on sale today, and it’s not all hype. Its all-terrain prowess is impressive, even when compared to the seemingly unstoppable Jeep Wrangler. And just like the Wrangler, the Bronco has a removable roof and doors, so you can drive topless for that extra bit of sunshine while on the street or tackling a trail.

You can get the Bronco with one of two turbocharged engines. Four-wheel drive is standard, and a seven-speed manual transmission is available for those who want to row their own gears. Even more exciting for off-road enthusiasts is the Sasquatch trim, which stands as a capable rival to both the Jeep Wrangler Rubicon and the Toyota 4Runner TRD Pro. There are also tons of accessories from Ford and aftermarket manufacturers to customize your Bronco to your heart’s desire.

We’re not expecting much to change for the 2022 Ford Bronco, though Ford has teased a new high-performance Raptor version. It’s anyone’s guess at this point what the Bronco Raptor will ultimately be like, but it’s fair to assume it will specialize in high-speed off-road performance thanks to a modified suspension and a more powerful engine.

The 2022 Ford Bronco doesn’t come with eight cylinders. Instead, there’s a standard 300-hp turbocharged 2.3-liter four-cylinder or an optional 330-hp twin-turbo 2.7-liter V-6. A 10-speed automatic transmission bolts to both gas engines, but a seven-speed manual is only compatible with the smaller one. Unfortunately, neither engine has an enthusiastic soundtrack. Every Bronco sends power to all four wheels, and its independent front suspension is more sophisticated than Jeep’s front stick axle.

Other noteworthy options include 35-inch mud-terrain tires, beadlock-capable wheels, electronic locking front and rear differentials, and a sway-bar-disconnect feature. After our first driving impressions, the 2022 Ford Bronco most impressed us with its on-road refinement. Not only is its steering more precise than the Wrangler’s wheel, but the Ford simply handles better overall. Of course, equipped with the largest tires and softest suspension, there’s significant brake dive, and its body-on-frame construction isn’t kept secret. Still, the Bronco isn’t a one-trick pony, and it’s capable of conquering truly treacherous terrain. Both the two- and four-door models are also rated to tow 3500 pounds—same as the Wrangler.

We expected better from the 2022 Ford Bronco‘s fuel economy because it’s a newer vehicle with a 10-speed automatic transmission. As is, it falls a few mpg short of equivalent Jeep Wrangler models in combined EPA ratings. Four-cylinder Broncos have an EPA-estimated fuel economy of up to 21 mpg but fall to 17 mpg when equipped with the Sasquatch off-road package. Six-cylinder versions reach up to 19 mpg combined and likewise fall to 17 mpg when equipped with the same package. Generally these figures are lower than those for comparable Jeep Wrangler models. The Bronco’s fuel economy ratings are closer to that of the Toyota 4Runner, a significantly older vehicle whose transmission has half the number of gears.

Available with two or four doors, soft tops or hardtops, and removable body panels, the Bronco offers the same open-air possibilities that make the Wrangler an outdoor person’s delight. The Ford’s interior has a few more innovations than the Jeep, too.

For example, the 2022 Ford Bronco has a rack built into the top of its dashboard that allows smartphones and GoPros to be mounted there. It also has frameless doors that are easy to remove. However, their long side glass can snag the weatherstripping and they allow extra wind noise to enter the cabin. Still, the extended-wheelbase four-door models have space on board to store all four doors. Since the exterior mirrors are mounted on the base of the windshield, they’re still useable when the doors are taken off.

When exposed to the elements, the cabin can be protected with the available rubberized flooring and marine-grade vinyl upholstery. Those who want a fancier environment can opt for leather seating surfaces, but the interior’s expansive swaths of plastic look cheap on upper trims. Even in the two-door Bronco, there’s enough space in the back seat to comfortably fit two adults. The four-door version alone has a third, middle seat in the rear and offers a hair more legroom, but most of its extra length applies to the cargo area, which is more than 50 percent larger than the two-door.

Ford’s latest in-dash Sync 4 software powers the 8.0- or 12.0-inch touchscreen that’s embedded in the middle of the Bronco’s dashboard. The setup allows over-the-air updates and can connect to the cloud and user’s smartphone wirelessly. The infotainment system also supports a host of modern infotainment features that include Apple CarPlay, Android Auto, and a subscription-based Wi-Fi hotspot. The unit can also be upgraded with desirable options, such as built-in navigation and a more powerful B&O stereo.

The Bronco is available with a suite of driver-assistance technology, including automatic high-beams and parking sensors. It also has equipment that makes low-speed rock crawling and trail driving easier. For more information about the Bronco’s crash-test results, visit the National Highway Traffic Safety Administration (NHTSA) and Insurance Institute for Highway Safety (IIHS) websites. 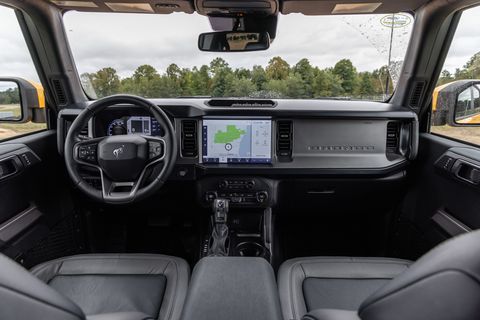 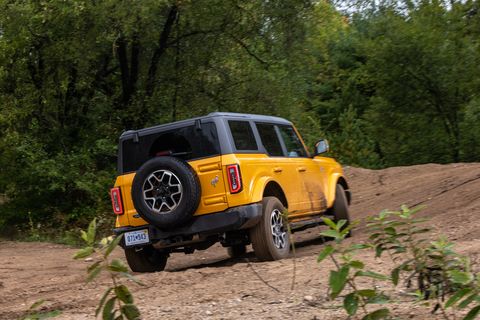 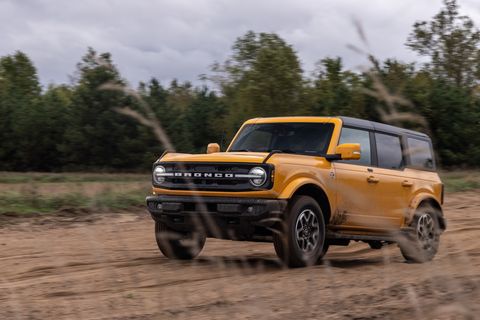