The 2023 Mercedes-AMG EQE‘s release date in the USA is scheduled for sometime early in 2023. The AMG EQE will, therefore, likely be coming out before the BMW i5.

When Mercedes-Benz debuted the W211 E55 AMG sedan in 2002 with its bellowing V8 engine, it was billed as the quickest production sedan in the world. Two decades later, much has changed.

This is the first AMG EQE, essentially an electric version of a modern AMG-badged E-Class, and while it has no V8, it’s much quicker than that groundbreaking E55.

The 2023 Mercedes-AMG EQE is a high-performance derivative of the previously revealed EQE electric sedan, and right now, BMW and Audi have no direct alternatives.

While that E55 obliterated its rivals in a straight line, the new 2023 Mercedes-AMG EQE will have to prove itself against Tesla (this car fits in somewhere between a Model 3 and Model S), while also convincing AMG fans that you don’t need a thunderous V8 under the hood – or any ICE powerplant at all, for that matter – to have fun.

The new 2023 Mercedes-AMG EQE sedan looks a lot like the bigger EQS with a similar egg-shaped profile and a smooth body that has been optimized for aerodynamics.

It’s attractive, modern, and more aggressive with its AMG touches, but perhaps not unique enough from its larger sibling. In front, there’s an AMG-specific black panel grille with vertical struts in chrome, along with digital light headlamps.

The tires are wrapped around aerodynamically-optimized light-alloy wheels measuring 20 inches, but 21-inch wheels are available. With the optional AMG Night package, there are additional black chrome elements and red brake calipers.

At the back, there is an aerodynamically-optimized diffuser and a large rear spoiler. Overall, the 2023 Mercedes-AMG EQE‘s exterior design is nice but it won’t bowl you over either.

The high-performance version of the EQE has AMG-specific electric motors in the front and rear that provide all-wheel drive. They pump out significantly more grunt than the standard model, with 617 horsepower on tap in the base configuration and 677 hp available with an optional Dynamic Plus package.

AMG claims a sprint to 60 mph in 3.2 seconds for the top version; we look forward to testing that claim when we get a 2023 Mercedes-AMG EQE in for testing.

The 2023 Mercedes-AMG EQE offers the same interior package as the standard model with a few twists. The seats are unique to the AMG version and there are various performance displays added to the information screens.

Because EV powertrains are quiet, there will also be special customizable fake sounds available to increase the auditory drama both inside and outside the car.

As more information becomes available on the 2023 Mercedes-AMG EQE, we’ll update this story with more details about: 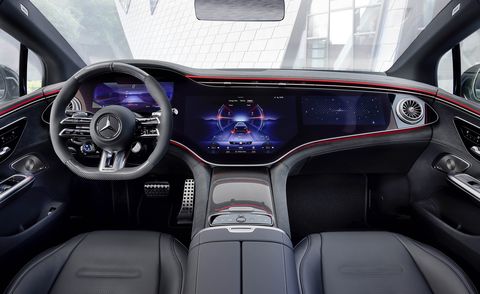 2022 Volkswagen Tiguan – All You Need To Know