The 2023 Stark Varg Electric Motocrosser is an off-road motorcycle designed and produced by Stark Future. The bike uses electric technology instead of gasoline and is said to be more lightweight and powerful than its gas counterparts. According to Stark Future, the bike does not produce noise and offers better control and handling for the smoothest ride anywhere. Stark Future employs a team of electronic professionals that have worked to develop the VARG’s inverter, motor, battery, and vehicle control unit.

The 2023 Stark Varg Electric Motocrosser is powered by a battery system that is both energy-conscious and environmental-friendly. At the moment, several improvements to the VARG are patent pending. You can order the bike through Stark Future’s website, and the company will ship it to you.

The 2023 Stark Varg Electric Motocrosser has been in development for two years and boasts 80 horsepower compared to about 61 for the most powerful 450cc MX bikes. The power output and characteristics can be modified via the on-bike smartphone dash or an App for your phone. The battery is claimed to last for up to 40 minutes of intense motocross use or 6 hours of recreational riding. And it will take 1-2 hours to recharge.

Stark Future was founded in 2020 and is based just outside of Barcelona. Anton Wass is the CEO and Co-Founder of Stark Future. Immediately previous to founding Stark Future, Wass was the co-founder of the profitable XLMoto and Sledstore motocross e-commerce websites in Stockholm, working there for 11 years. During his run, he earned an MBA at Stockholm’s Företagsekonomiska Institutet. Unquestionably, Wass is a successful marketer and someone involved in motocross.

In less than two years, Stark Future is claiming to have built a highly disruptive motocrosser—the Varg, which is “Strong Wolf” in Swedish. “The industry has set their benchmarks for combustion-engined motorcycles, and it focuses on minor incremental steps each year,” according to a Stark spokesman. “Stark Future has blown this outdated and environmentally unfriendly standard away from the track. The company wants to take motocross out of the rut and have analyzed and beaten every yardstick there is.”

Stark says the battery has a 6 kWh capacity and weighs 32 kilograms (just over 70 pounds). Stark also claims the air-cooled motor delivers peaks of 80 horsepower and 69 ft-lbs of torque (the spec sheet claims 938 Nm, which clearly leaves out a decimal point). Range fluctuates from 35 minutes at MXGP race speeds (about the same as a full tank of gas) to “six hours of easy trail riding.” Recharging is claimed to take “one-to-two hours,” rather than providing a fixed number and charging requirements.

For comparison, the 2022 Zero DS (dual-sport) has a battery pack with a claimed nominal capacity of 6.3 kWh—close enough for this example. It’s matched to a Z-Force 75-5 motor that is good for 46 horsepower and 78 ft-lbs of torque, making it much less power-hungry than the Varg. The Zero’s range at 55 mph is 49 miles—shorter than an hour.

The FXE’s stated city range is 82 miles, which would charitably be rated as four hours at low speeds. Also, in our experience, the Zeroes (and electric motorcycles, in general) do not attain claimed range numbers, though they’ve been getting closer as time goes on.

So, Stark Future’s numbers are in the ballpark, though they are claiming to be hitting home runs. The company describes its battery system as “one of the most compact and energy-dense in the world,” which is quite a feat for a company less than two years old. The motor benefits from “advanced tech and ideas, such as the patent-pending magnesium honeycomb casing, ‘slippery-fingers’ cell holders, a pressure relief system and a one-sided powerboard configuring the battery cells,” according to Stark.

The weight of the 2023 Stark Varg is claimed to be 242 pounds, putting it right at the same curb weight as the Austrian 450 motocrossers, though the ICE bikes get lighter as they run through fuel.

The hard parts appear to be top-notch. The suspension is by KYB with input from Technical Touch in America, there are Brembo brake calipers, Pirelli Scorpion MX32 tires, Excel rims laced to CNC-machined aluminum hubs, stainless steel footpegs, and an innovative click-based chain adjustment system. The frame uses the motor as a stressed member, and the subframe is carbon fiber. We’re not sure about the “patent-pending super-robust ‘floating’ dual compound skid plate that removes the need for a lower section of the frame and provides supreme protection.”

We’re definitely impressed by the electronic tunability of the power delivery of the electric motor—an advantage well worth exploiting compared to internal combustion engines. Using an app on a smartphone, the rider determines the level of engine braking, flywheel effect, and traction control, as well as the power curve. 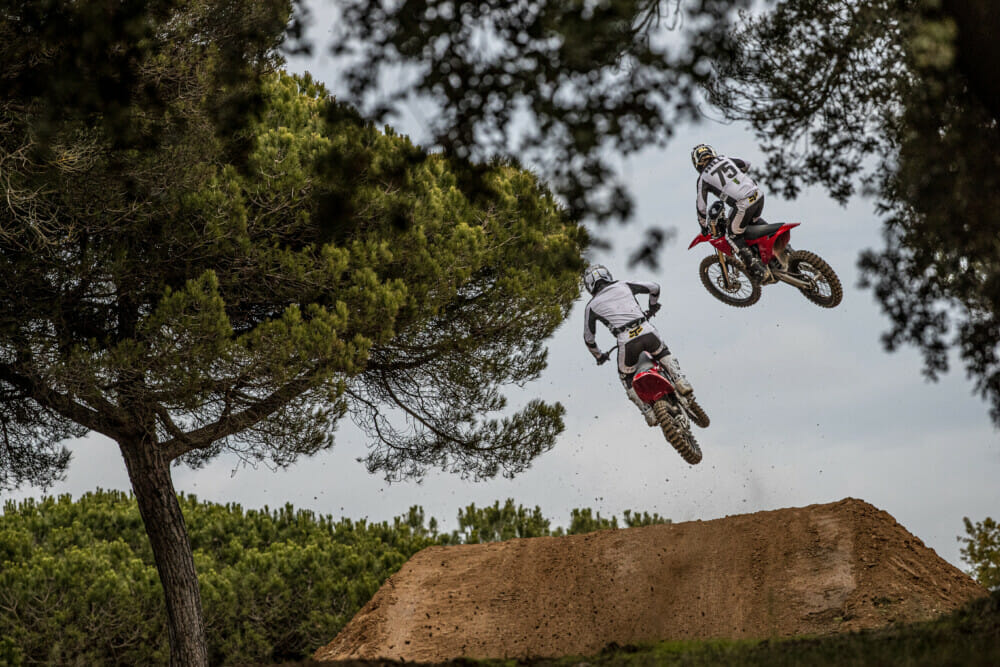