The 2023 Audi Q8 is a two-row midsize luxury SUV with seating for five people that sits at the top of the Audi’s SUV lineup. But despite its numeration, it is not Audi’s largest SUV — the Q8’s raked roofline and deleted third-row seat make it less practical than the less expensive but larger Q7.

But what you get in return for that trade-off is a more stylish and sporty design, plus a more powerful base engine. The Q8 competes with other German luxury coupe-like SUVs such as the Mercedes-Benz GLE Coupe, BMW X6, and the Porsche Cayenne Coupe.

If you’re looking for a Q8 with even sportier intentions, there’s either the V8-powered Audi SQ8 or RS Q8. The Q8 is a strong competitor among midsize luxury SUVs, but some compromises in practicality keep it from the top of the class.

Audi provides every 2023 Audi Q8 with a turbocharged 3.0-liter V-6 that makes 335 horsepower and 369 pound-feet of torque. It pairs with an eight-speed automatic transmission and Quattro all-wheel drive. A 48-volt hybrid-assist system aids stop-start operation, which was smooth and quiet during our experience.

While the Audi had plenty of passing power on the highway, it felt hesitant around town unless we crushed the gas pedal. The transmission had mostly dutiful reactions, but it and the engine best cooperated in Dynamic mode, which provoked snappier responses.

We only wish the engine and exhaust made gutsier sounds. While it swiftly changes directions and obediently hustles around corners, it’s less engaging than Audi sedans, such as the sleek A7. The Q8’s steering has light effort and linear feedback, which was relaxing on long trips but boring on switchback roads.

Our test vehicle had the optional air suspension and wore 22-inch wheels—21-inches are standard. These large rollers were mostly quiet even on lumpy surfaces.

With adjustable ride height and four-wheel steering (included with the Adaptive Chassis package), our 2023 Audi Q8 was agile in tight spaces and capable of tackling choppy terrain.

Its brake pedal was easy to modulate at highway speed but suffered from inconsistent reactions in traffic. Still, it hauled the hefty crossover from 70 mph to zero in a competitive 170 feet during our emergency-braking test.

The 2023 Audi Q8 has mediocre EPA estimates that are lower than other all-wheel-drive rivals. The government estimates the Audi gets 18 mpg city and 23 highway, which is identical to the Q7 with the same engine. The Q8 we took on our highway fuel-economy route greatly exceeded its EPA highway rating, however.

It earned 28 mpg over 200 miles, while the last Q7 we tested saw 24 mpg in the same test. A similarly equipped BMW X6 returned 29 mpg. For more information about the 2023 Audi Q8’s fuel economy, visit the EPA’s website.

In typical fashion, Audi has crafted a sophisticated and sturdy environment inside the Q8. The materials are premium, and the panels are expertly aligned. While the base model misses out on upscale features such as four-zone climate control and a leather dashboard with contrast stitching, it has standard heated front seats and a panoramic sunroof.

Only the top-of-the-line model offers massaging front seats, upgraded leather surfaces, and quieter dual-pane glass. Our test vehicle had all that plus a head-up display and customizable ambient interior lighting. Not only is the 2023 Audi Q8 visually impressive, but it also has more than enough passenger space.

The driving position remains sporty despite its elevated height, and two adults can leisurely stretch out in the back. Although the two-row Q8 has less cargo volume than the three-row Q7, we managed to squeeze eight carry-on bags behind its back seat.

That number increased to 23 (two less than in the Q7) with the split-folding rear bench folded nearly flat. Our test vehicle had the optional air suspension, which can lower the rear end to help with lifting luggage in and out. Inside, the Q8 has limited cubby storage. Its shallow center console bin and narrow door pockets left us with few spots to store small items.

With a pair of vivid touchscreens integrated into the dashboard and center console, every 2023 Audi Q8 boasts a cutting-edge infotainment system. Instead of the intuitive rotary controller found on other Audi models, the displays respond to touch inputs with haptic feedback.

While the base model is available with several driver assists, more advanced options such as adaptive cruise control with stop-and-go technology and night vision with pedestrian detection are reserved for higher trims.

Our test vehicle had the optional 360-degree camera system that helped us navigate narrow drive-throughs and avoid scratching the massive rims. 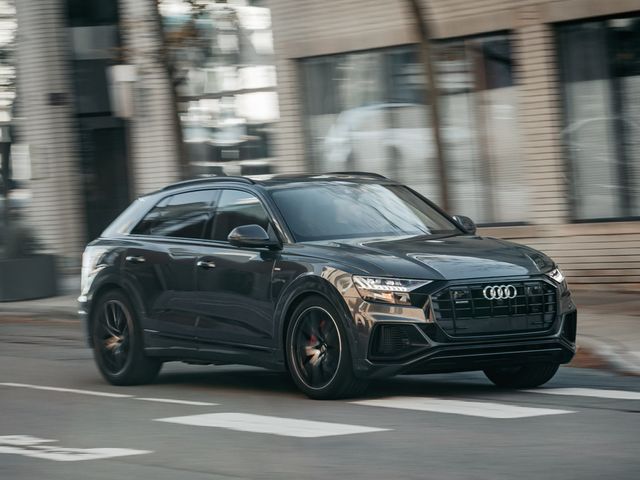 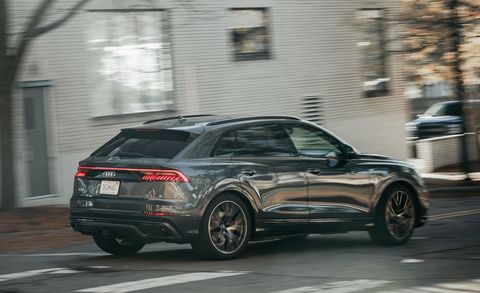 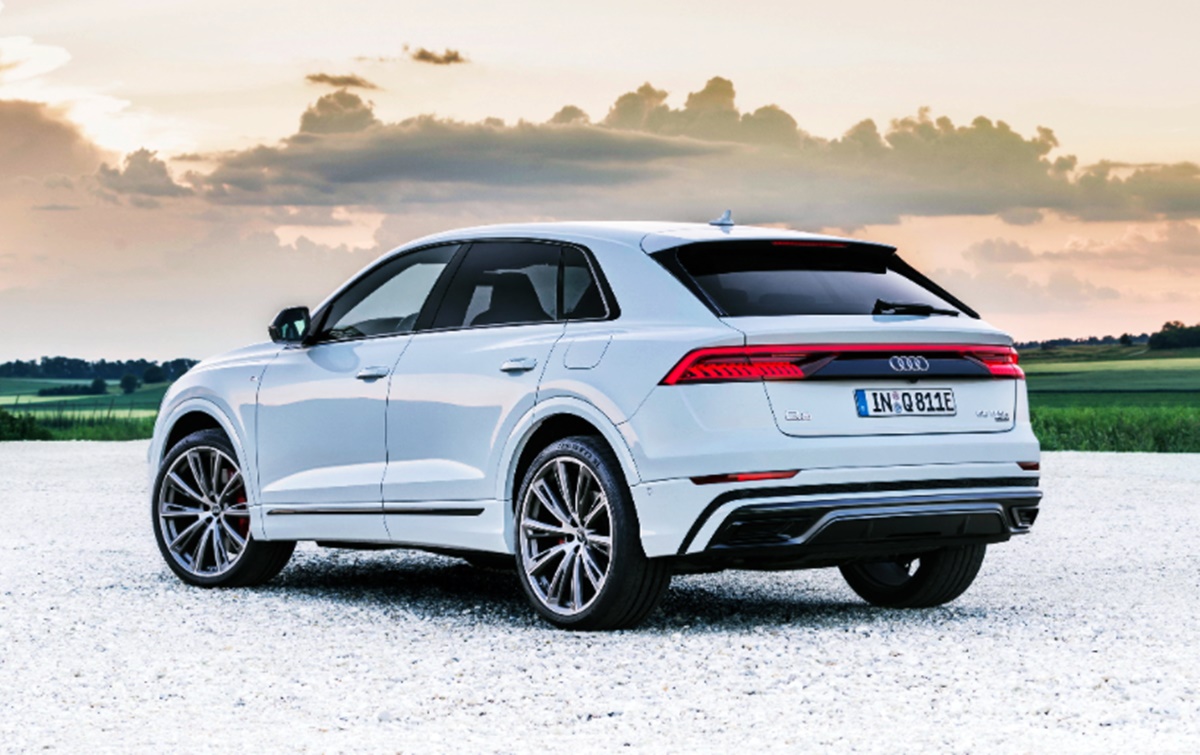 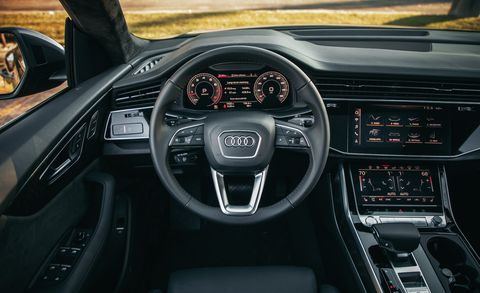